5 Photo Locations in Milwaukee You Haven't Thought About

You probably already know about several great photo locations in Milwaukee. These could include the Milwaukee Art Museum, the North Point Lighthouse, the Riverwalk, or Lakeshore State Park. I like all of them. They’re definitely good choices.

But what about other spots? It’s fun for me to scope out new places and that’s what I have done recently. Here are 5 Milwaukee photo locations you may have overlooked (but I haven’t!):

Did you know that there is a cool lighthouse behind the Marcus Amphitheater? If not, now you do! And that's a good thing because the Milwaukee Pierhead Light, as it's called, creates a striking backdrop for photos. Its bright, red color against the blue sky is ideal for creating memorable pictures. For example, you could lean against the red railings and include the lighthouse in the background. 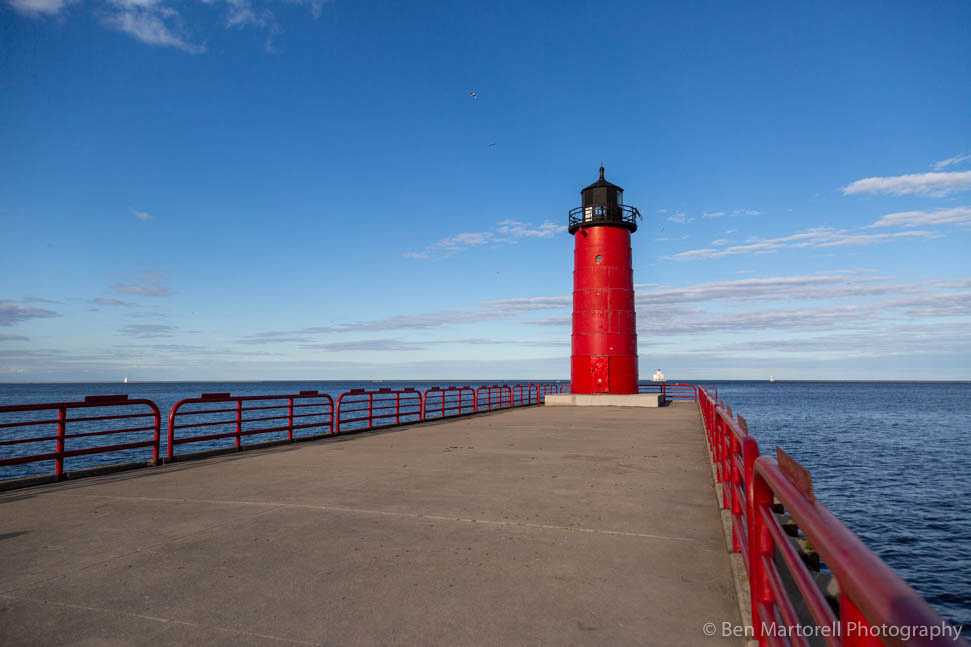 Here is another view of the light from from farther away. 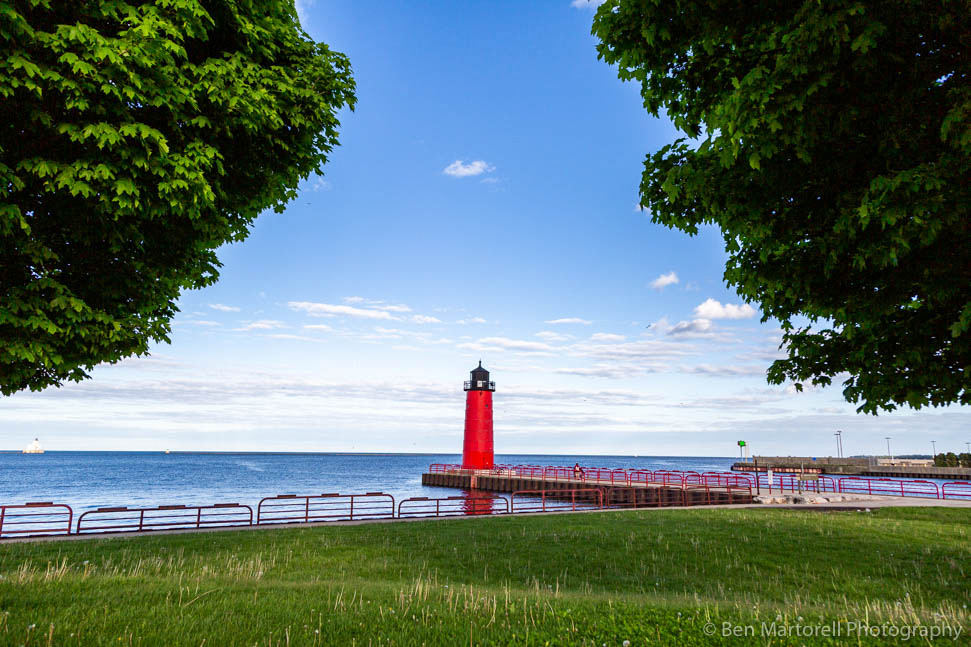 This row of maple trees near the light is intriguing as well. I could take a photo of you and your partner sitting on a blanket in between them with the sky, the lighthouse and the lake as the backdrop. Or I could have you pose in front of them with the camera facing the amphitheater. Coming back in the fall would be awesome, too, because the trees would be even more beautiful. 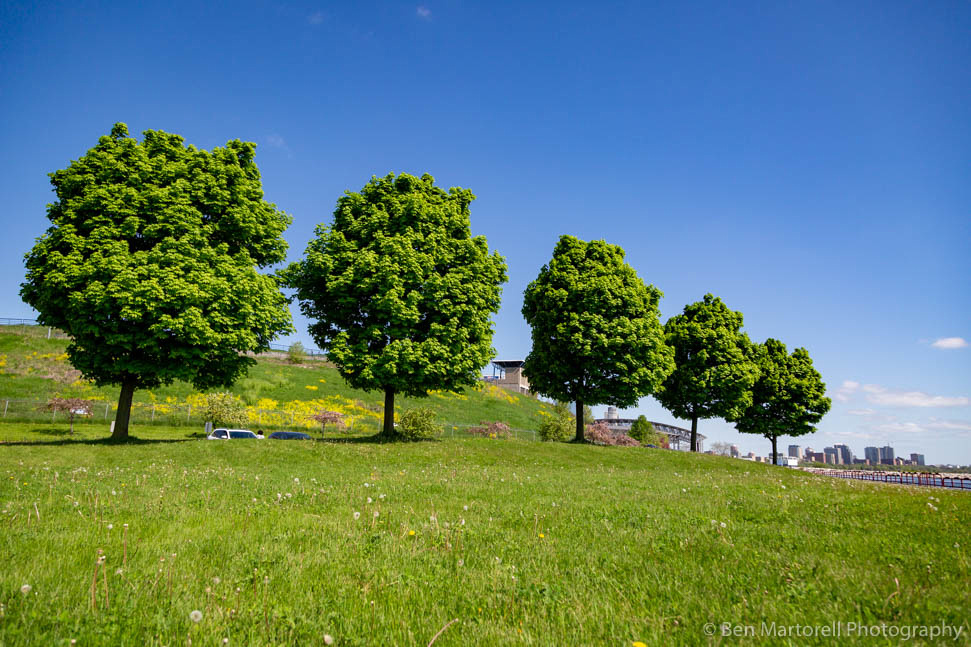 Maple Trees This row of maple trees is located near the light and in front of the Marcus Amphitheater. They would make a great backdrop in the fall.

Another advantage of this location is that it's next to the Hoan Bridge. You can't go wrong with getting pictures with one of Milwaukee's most iconic landmarks as your backdrop! Just be sure to take photos in the early-to mid-morning or later afternoon to take advantage of good sunlight. 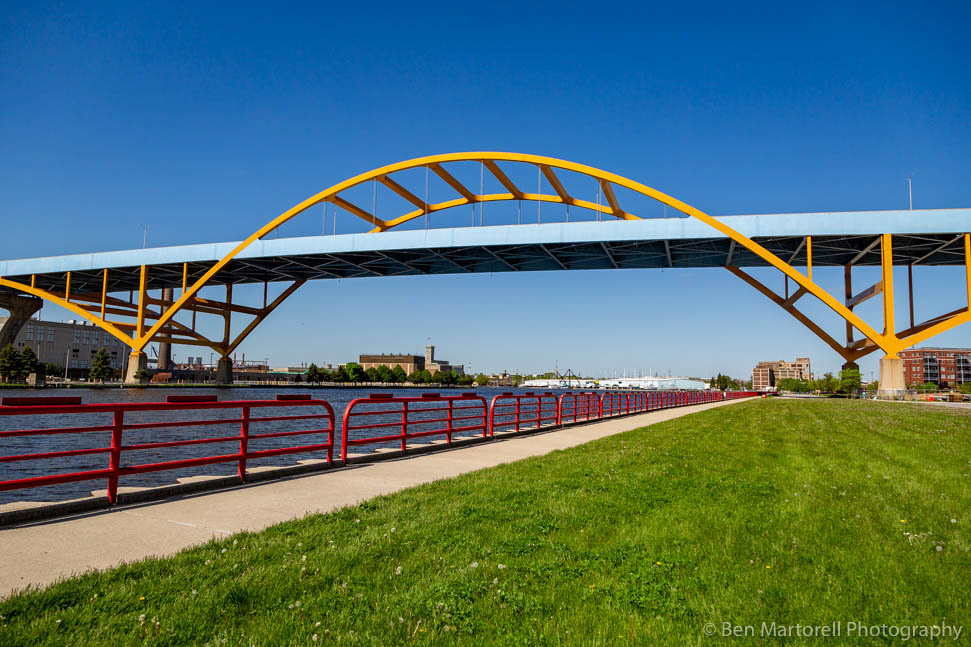 The Hoan BridgeThe Hoan Bridge is a cool backdrop for photos. This picture show how it's lit up in the morning. At this time, the sun is behind the pierhead light, which isn't great for pictures. 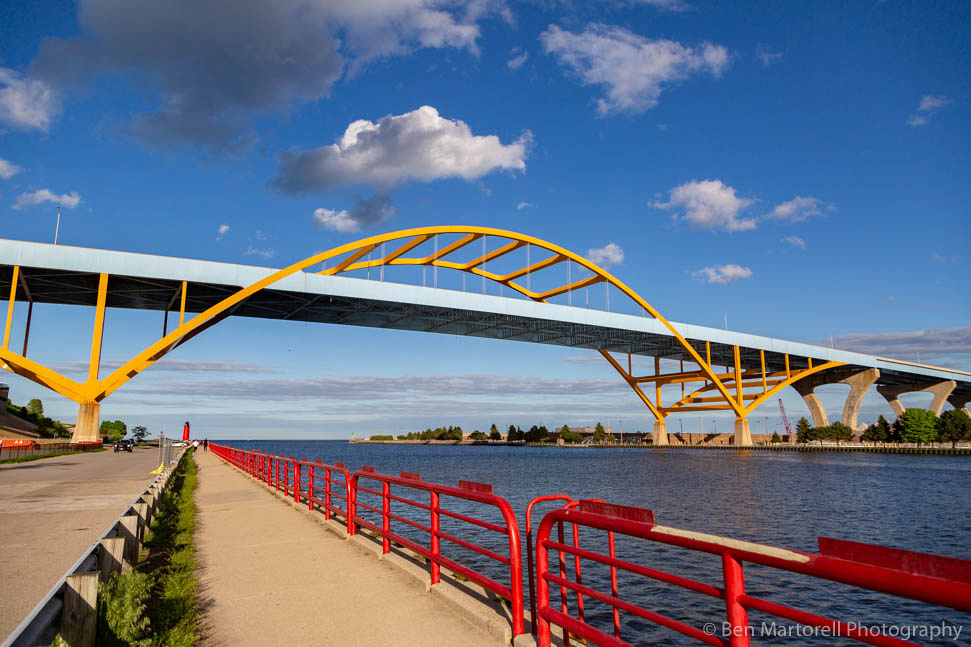 The Hoan BridgeThis photo shows the Hoan Bridge looking east towards Lake Michigan. I took this picture in the afternoon.

One of the newest parks in the city, Trestle Park is a small but very interesting photo location in Milwaukee. It’s named after the massive, rotating railroad trestle in the middle of the Milwaukee River. The park has plenty of bench space, flowering trees (in the spring), a small grassy area, and two railroad crossing lights. It is also situated along the Milwaukee Riverwalk. 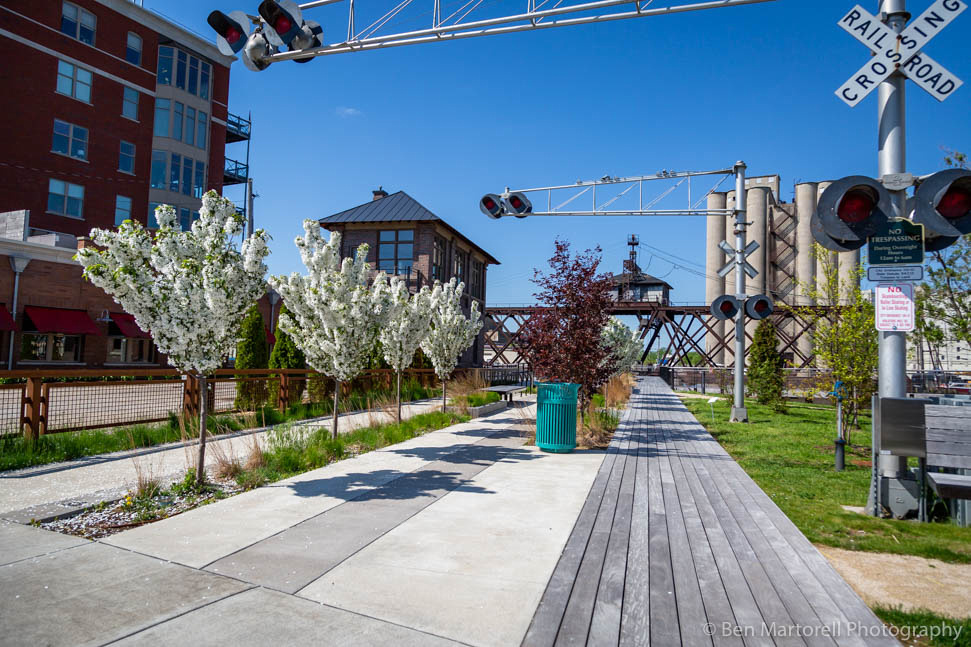 Trestle ParkTrestle Park features flowering trees, a grassy area (to the right of this picture), the railroad crossing lights, and benches to sit on. It is located along the Milwaukee Riverwalk.

Here is a view of the boardwalk and trestle. 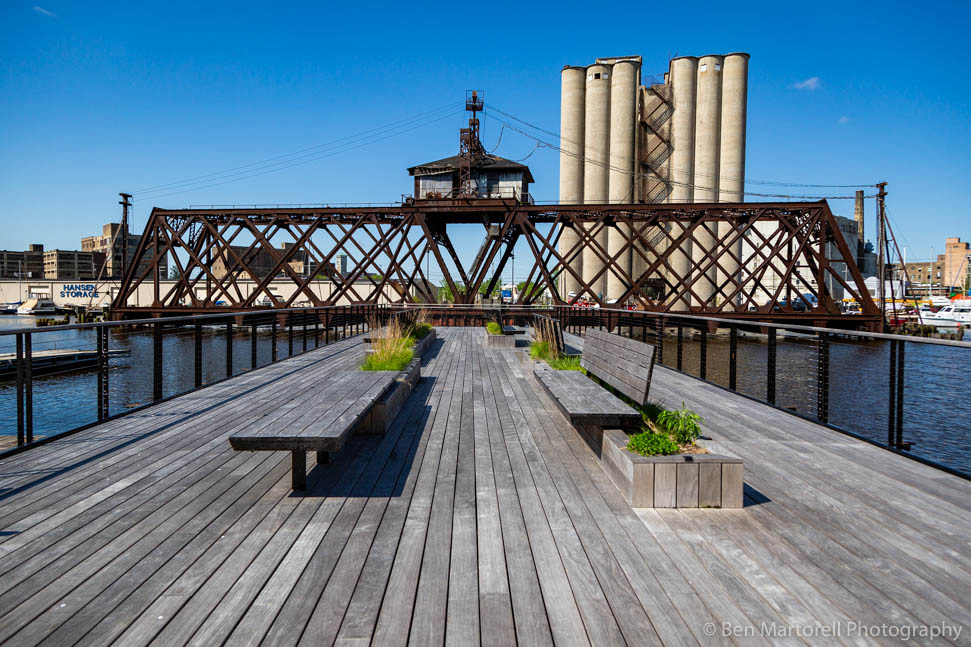 The great thing about this park is that you can take a variety of photos from different angles. If you want an industrial look, I would have you pose with the trestle and the old grain silos behind you (however, please be aware the silos will be demolished soon). Or I might ask you to sit on the benches with the trees as the background. Another option is to put a blanket on the grass with your partner or family and get a wide-angle picture of the whole park as a backdrop. Whatever we might do, you'll be sure to get some unique pictures!

Under the Marquette Interchange

If you're looking for a dramatic setting for your photos, the area underneath the Marquette Interchange is a great choice. The highways soar above you, providing a terrific background of contrasting colors, shapes, and shadows. There is a lot of room to move around as well, giving you the ability to take a variety of photos. 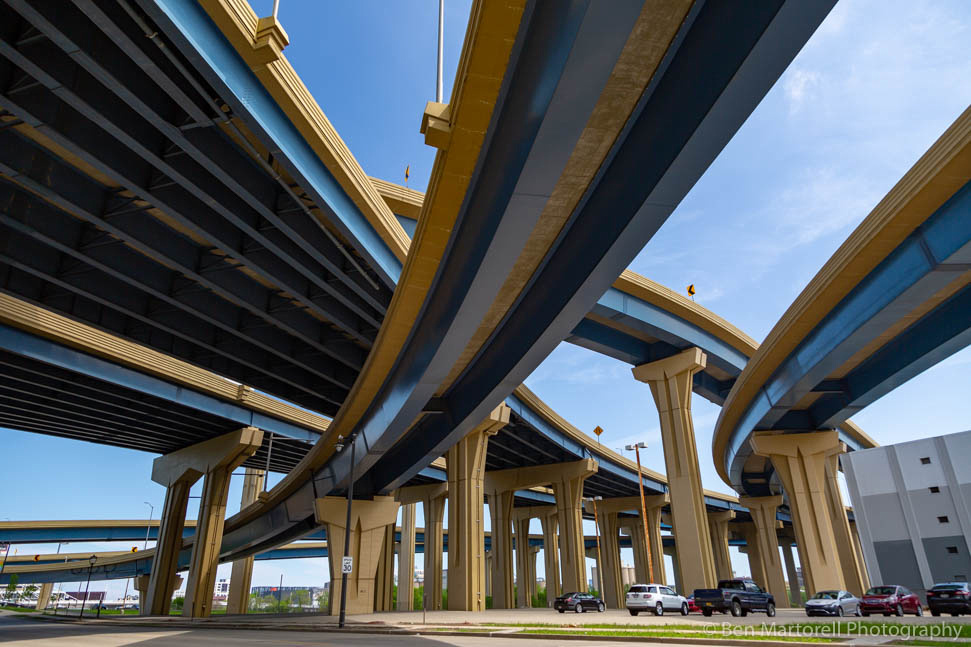 Highways of the Marquette InterchangeThis photo location is really unique. The highways above you offer a great background for a photo shoot location.

I could get photos of you from a low angle to include as much of the highways as possible. I also may have you pose next to one of the big concrete supports. It’s best to go here in the morning or afternoon to ensure you get enough light. 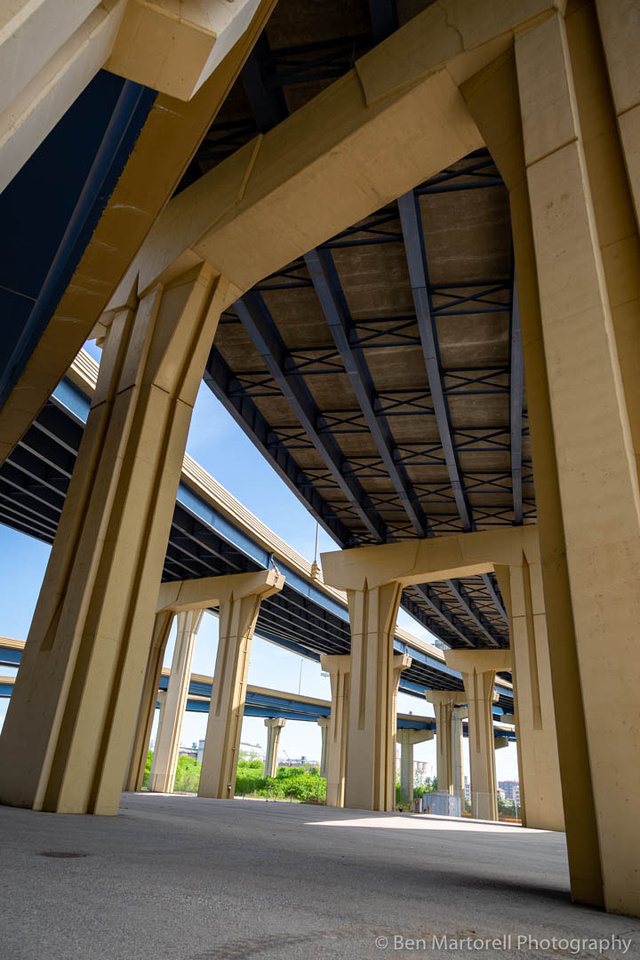 Highways of the Marquette InterchangeThere is plenty of space under the highways to move around. You can get photos from any direction to create interesting images.

Kadish Park is an awesome location for photos! The most obvious reason is this beautiful, unobstructed view of Milwaukee. I recommend going in the later afternoon or evening when the sun shines nicely on the city. 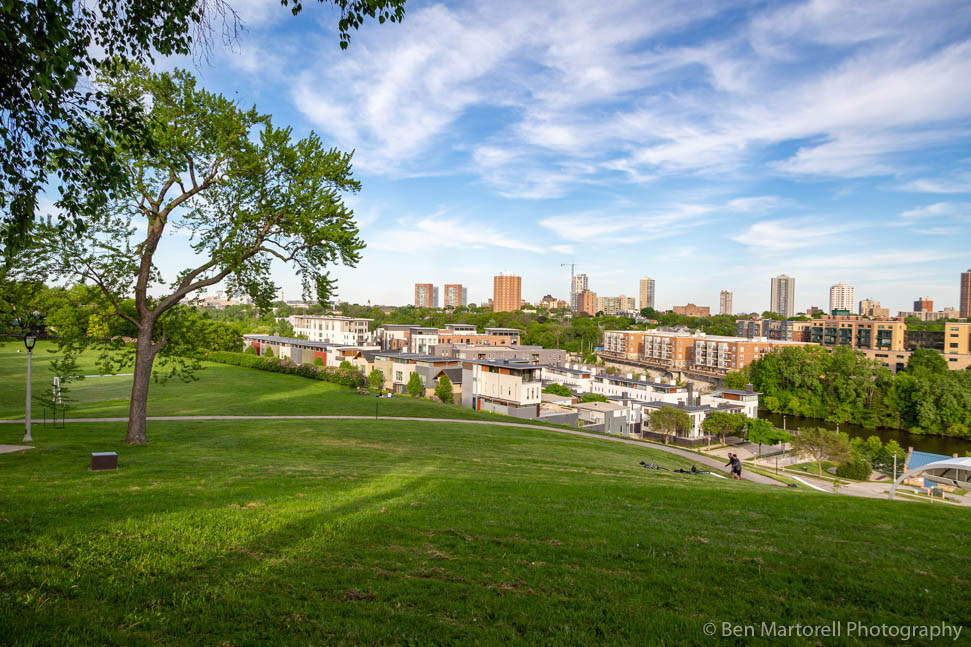 Overlooking Milwaukee From Kadish Park Kadish Park has one of the best of views of Milwaukee. If you want to the city as your background, this is a great choice. The evening is the best time come here.

The park also features this cool, outdoor theater. I would take photos of you in the seating area, either sitting or standing, in a variety of poses. This would also be a fun spot for family photos or a large group because people could spread out easily. 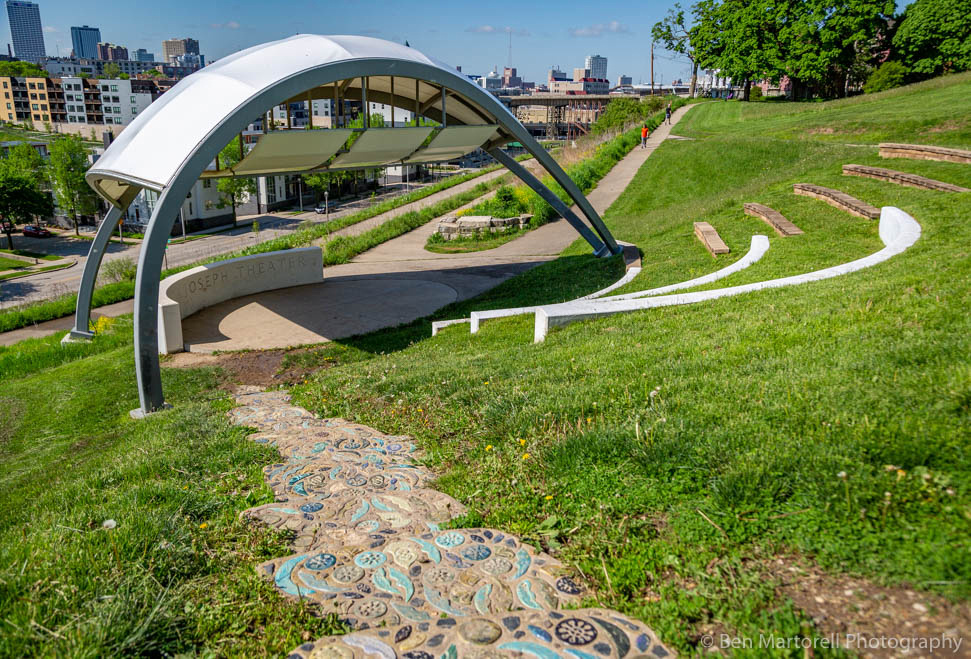 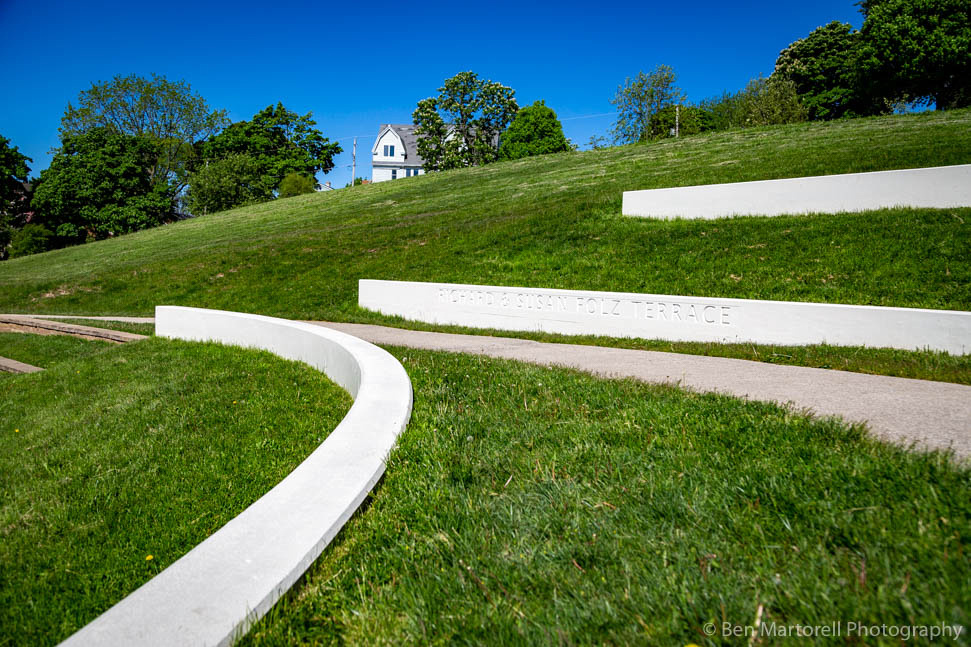 Kadish Park Outdoor TheaterThe seating are rises up with the hill. A variety of sitting poses here would look great. Groups could spread out here as well.

Just to the west of the theater is this interesting, steel staircase. The steel structure at the top would form a compelling frame around you. A variety of shots standing or sitting on the steps would look great. 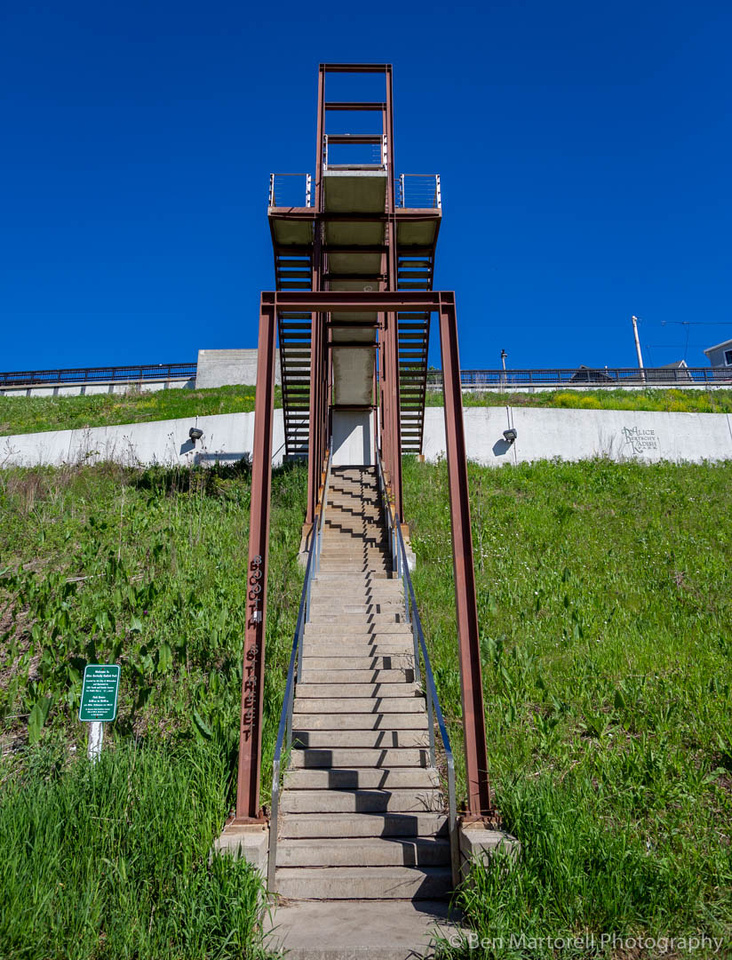 Steel Staircase at Kadish ParkThis steel staircase rises from Commerce Street to a walking path (that's part of the Oak Leaf Trail) and then to Glover Avenue. 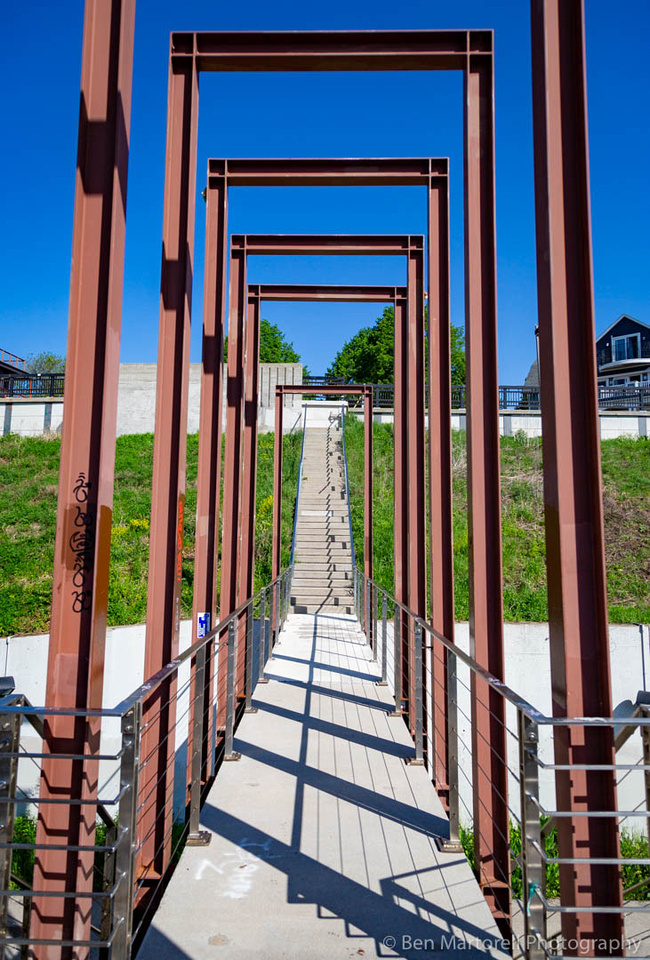 Steel Staircase at the Top LevelThe top level of the staircase has a lookout platform and these steel beams that form box-like space. Definitely a cool spot for pictures! 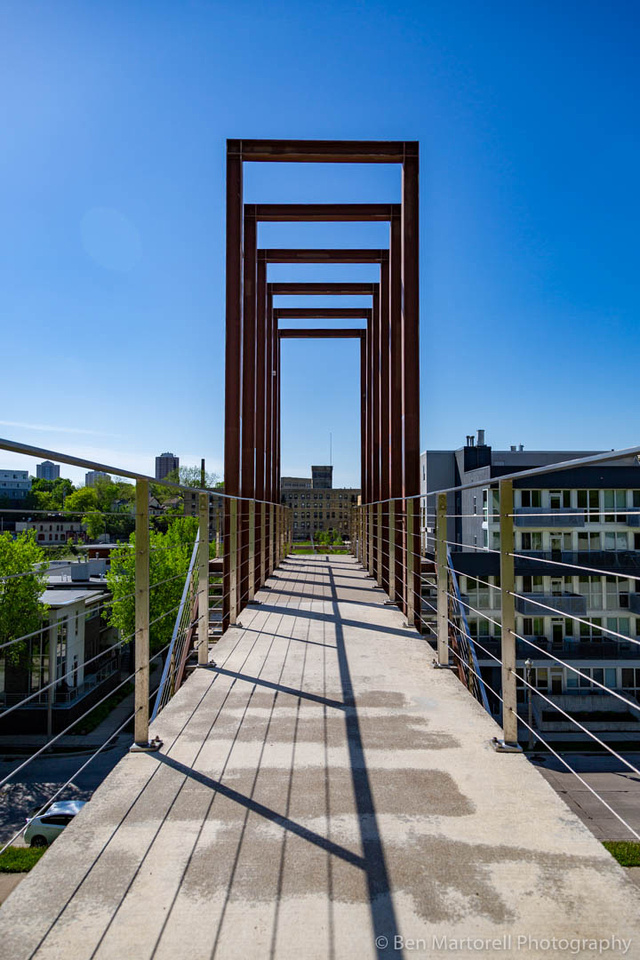 Top Level of the Steel StaircaseThe top level of the staircase looking south. This direction would also be good for pictures.

Next to the staircase is this winding path that leads to Commerce Street. An array of flowers, plants, and tall grasses grow alongside it. Posing next to them would make an attractive photo. Standing near the concrete walls would work, too, if you want add a white background. 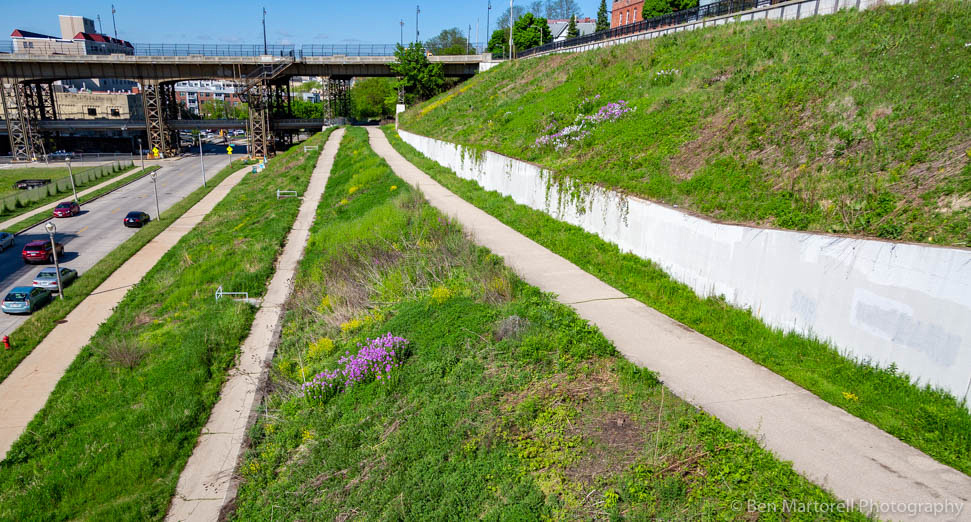 Kadish Park Winding PathLooking west from the staircase offers this view of the winding path (which is part of the Oak Leaf Trail) that goes down to Commerce Street. 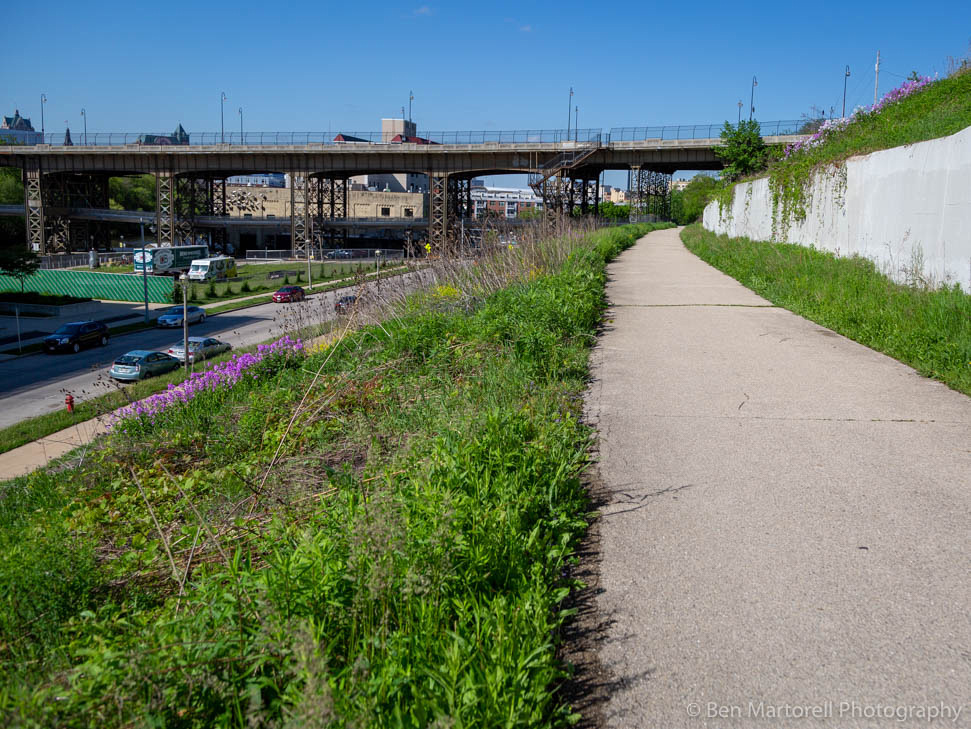 Winding Path in Kadish ParkThe winding path (which is part of the Oak Leaf Trail) in Kadish Parks leads down to Commerce Street as well as the pedestrian bridge under Holton Street. 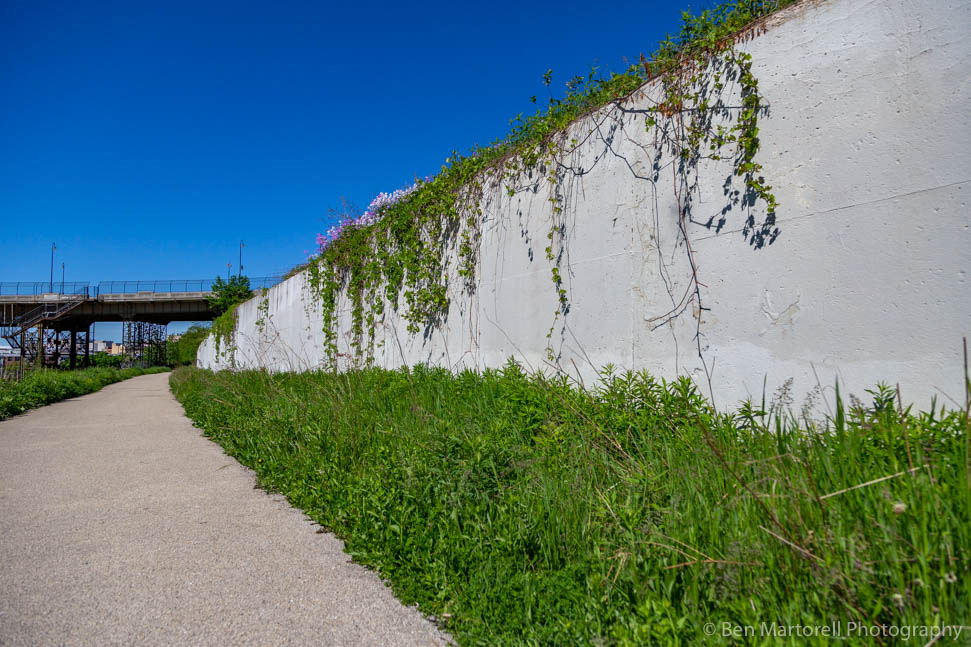 Winding Path at Kadish ParkConcrete walls help create the winding path in Kadish Parks that leads down to Commerce Street.

It might be easy to forget about “The Calling” sculpture as a photo location. After all, it is very close to the Milwaukee Art Museum, which is a popular place to take pictures. But the size, bold orange color, and shape of the “The Calling” make it a great location for photos. I would take photos of you where it's totally visible in the background, or direct you to pose next to it. 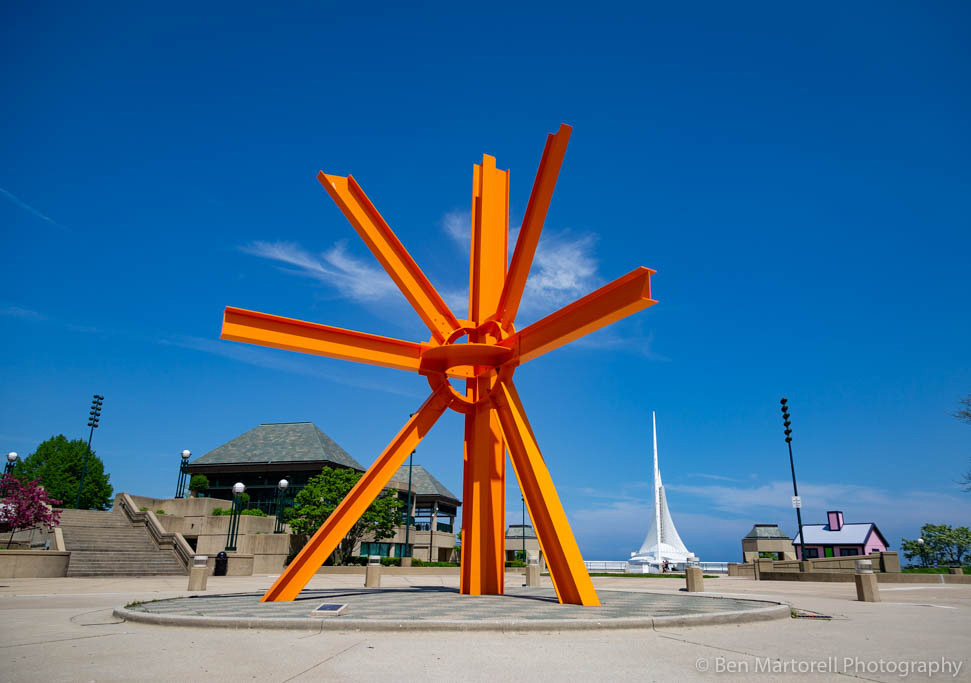 "The Calling" SculptureMaybe the most famous public artwork in Milwaukee, "The Calling" sculpture by Mark di Suvero is a great location for photos. The Milwaukee Art Museum is in the background. 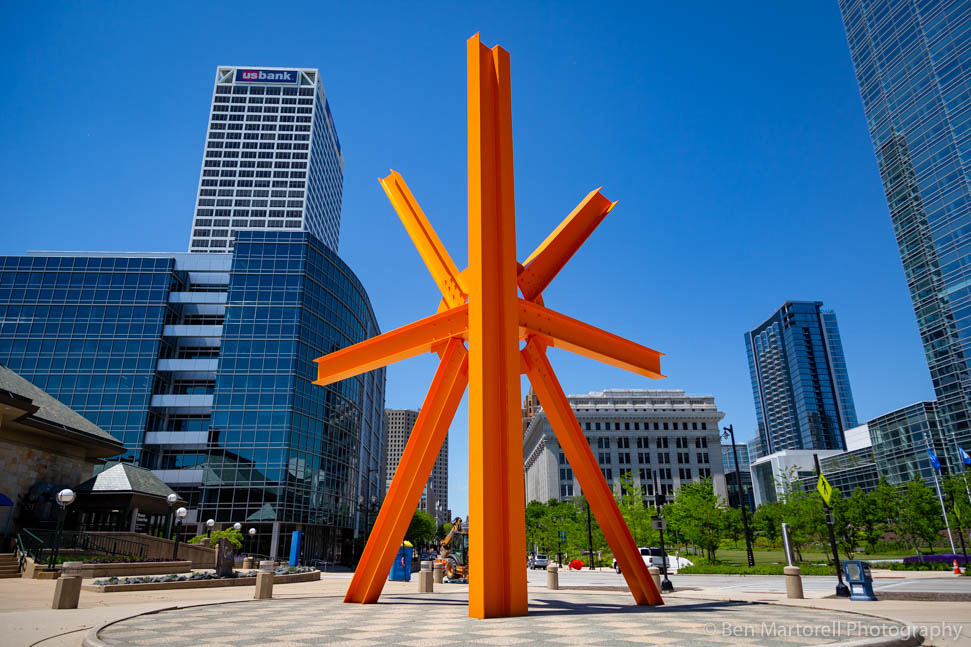 Go Check Out These Photo Locations!

Do any of these places appeal to you? If so, make some time to scope them out for yourself. That way you can decide if you like them.

If you do, contact me today to set up an appointment! I would be happy to take your engagement, headshot, family or any other portrait photos at any of these locations or anywhere else you like. Looking forward to hearing from you!